If you’ve seen Koutetsu no Kabaneri I think it’s safe to assume you noticed that a few times every episode, a particular shot would rear its head as particularly beautiful and well-drawn. I know a lot of people, myself included, found the effect a little jarring – in addition to blowing me away with those special shots it made me realise how bland it looked the rest of the time. That said, it got me wondering, how did they achieve the effect, and perhaps more importantly, why? I did a bit of digging, and what I found has given me a lot more respect for what they were trying to achieve and the skill and effort that went into these ‘make-up animation’ shots.

The story of Kabaneri’s animation style all starts with the drawings of one man, Haruhiko Mikimoto. Mikimoto was a major formative player in the 80s anime aesthetic, working extensively alongside Shoji Kawamori, he was responsible for the character design work for the original Macross and the subsequent sequels up until the Macross 7 series. He also designed the characters for GAINAX’s seminal Gunbuster OVA.  As a designer who is pure illustrator rather than of animator origins, the degree to which he was embedded in the anime look during the 80s was certainly unusual. He was even credited with animation director (Character Director, specifically) on Super Dimension Fortress Macross, which is definitely rare for a non-animator, and kind of unheard of nowadays. He has a gentle art style that lends itself to beautiful girls, with an element of realism and a soft beauty, his designs stand the test of time.

Since his heyday he has bowed out of the anime industry to some degree, but has remained active as an illustrator and manga artist. Fleeting chances at a major comeback have slipped by over the years, the most recent being the designer for the adaptation of his manga, Tytania. Sadly, that series fell far short of being a grand success. He had previously stated that he thought he may not get any more opportunities to design in anime due to the fact that he pursues the use of shadow and delicate line-work to express his characters which runs counter to the direction of the industry, tending to favour simple designs with crisp lines.

This all changed, however, when the director of Kabaneri, Tetsurou Araki, reached out to him for his individual style to mark a triumphant return to the medium. To help his revival of his classic look, he discussed with director Araki what they could do on Kabaneri and came up with the idea of not using the standard 1 or 2 grade shadows but instead using ‘0.5 grade shadows’. Before getting into the hype ‘0.5 grade shadows’ buzz term, let me quickly touch on what shadow grades mean.

Basically most anime is done with 1-grade shadows, back in the 80s and the 90s to some degree, the design work and aesthetic was such that it was popular to ramp that up to 2-grade shadows. This means you have 3 dimensions of shading that the key animators have to apply to their drawings. 1 grade usually means a character can have one shade of shadow, 2 grades means they can have a deeper level of shadow within a shadow. These grades have different predefined coloured lines/shading within the genga.

In this image, you can see that the character is drawn to 2-grade shadows. There is a shadow shading on the hair (1影) and then a deeper shade (2影). They have also used a highlight shade (ハイライト).

You might be confused then as to what 0.5 grade means. How can you have half a grade? Apparently, so was Mikimoto, who originally thought that shadow would be used sparsely and with somewhat faint colours so as to not make them too bold. However, the idea was to diminish the clear definition of shadow lines altogether. Put very simply, the concept of 0.5 grade shadow is that instead of producing anime with rigid, line-defined areas of shadow, the animation would have the feel of an illustration, using soft gradients and brushes to apply shading. 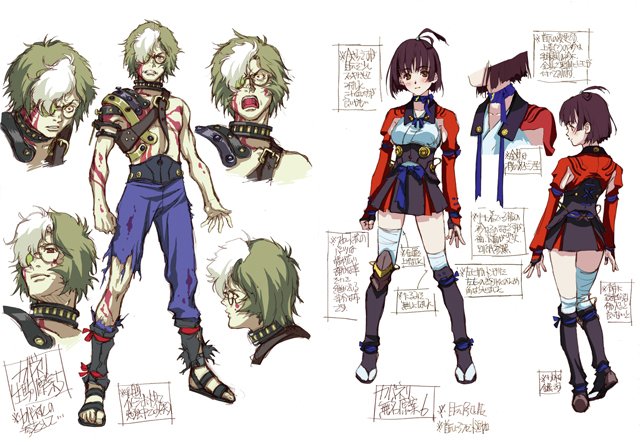 As you might imagine, this is a massively ambitious shift in the production norm and very difficult to apply. If you are familiar with the work of a key animator you would know that their work is taken by someone else to be digitised into computer format before being coloured. The lines of the animators guide the colouring staff as to how the shading and highlight should be applied. This means that the key animator cannot simply apply gradient and brush shading directly in their key-frames. To tackle this approach, director Araki had to reform the production process itself with the creation of a brand new production credit, the ‘make-up animator’

A kind-of similar credit already exists, and is also used in Kabaneri, called Special Effect (特殊効果). Special effects also involves touching up the digitised drawings but is generally used for mechanical objects such as guns or mecha. Director Araki allowed Kabaneri’s special effects artist, Chiemi Irisa (入佐芽詠美) to share some examples of her work on twitter, offering a rare glance of the position at work. What a different show Kabaneri would have been without this!

But the make-up animator credit is different in a number of ways. The most obvious distinction is that it’s being applied to characters, sometimes in motion, rather than static objects. As you can imagine, illustrating people and mechanical detail require a very different skillset. However,the differences aren’t purely cosmetic (pardon the pun) – the make-up animator has a much bigger part in the animation production process.

Normally, the key animator’s drawings are in-betweened and digitised and then passed on to touch-up and colouring. Once the colouring is done, the Special Effects role steps in and adds detail, as seen in the above picture. The make-up animator, however, takes the reigns from the in-betweening stage, being responsible for the digitisation, colouring and then their own brand of beautification. Various techniques are applied to transform a normal cut into more of an illustration following the ‘0.5 grade shading’ philosophy. Brushes, special linework, and gradient colouring are digitally painted to evoke the gentle, delicate artistry of Mikimoto’s original illustrations.

The example below shows this being applied.

In this case, you can see that the genga is already quite detailed and uses 2-grade shadows, plus highlights. These shadows and highlight lines defined by the genga are strictly coloured in the next section by the make-up animator. The final image shows the completed frame with the ‘make-up’ effects applied.

This example clearly shows the application of digitally painted brush, shine and soft lines on the face, hair and eyes. They really are applying make-up to bring out the beauty of the character and the 0.5 grade shading is a clear part of that. In the final image, the shadows are no longer clear-cut levels but naturally gradient. The result is quite stunning and does reflect the soft beauty in some of Mikimoto’s illustrations.

This work was done buy a team of Make-Up Animators led by Sachiko Matsumoto  with a series-wide credit of chief make-up animator. Sachiko has been thriving in a the photography/compositing area of production for some time, doing great work on Guilty Crown back before WIT was spawned from from I.G. The surprising shift to a more drawing-based role that even involves work with in-between drawing is made possible by her original fondness for drawing and her art school graduation.

Sachiko looked deeply into Mikimoto’s illustrations, observing the radiance that comes from his blurred colours and the soulful highlight in his pupils, and the way his hair feels like one long, gentle stream. She also drew inspiration from Osamu Dezaki’s harmony cuts, where the shot turns into a painting with cel and background seamlessly coming together into one artwork. This inspiration is very clear in some of the made-up shots.

If anyone remembers the remarkable, completely over-promising trailer for Kabaneri? If not, I’ve inserted it below. The extensive use of make-up animation and special effects in every shot of this trailer was a massive part of its wow-factor (and subsequent over-hype).

The studio invested in a new piece of software called 「TVPaint Animation」for this work on the trailer. The software is for digital genga, providing a lot of advanced tools including a range of brush effects.Only a small team of people with digital genga experience were at WIT studio and they had a lot of trial an error with learning the software. When the production started on the full show, they were pulled together to form the make-up animator team.

The limitations of the make-up animator approach is that it would be a prohibitively expensive undertaking to do it frame-by-frame for whole sequences. Where the trailer could afford to deliver a concentrated, uninterrupted hit of highly touched-up animation, the series fell well short of this. Despite the hype surrounding this new credit, the reality was that it could only be applied to certain key moments, mainly money shots of the characters. The team worked on about 10 cuts per episode.

While those cuts certainly look fantastic, I think the overall experience for a lot of people was a jarring one. Those spotlight moments, it turns out, also tend to illuminate how bland and flat the show looks like without its make-up on. I have no doubt that, especially given it’s poor production values further into the series, their workload would have been better refocused on the basics of dynamic and expressive animation. That said, I cannot fault it as a marketing technique – the trailer certainly rammed this series into many people’s ‘must-watch’ baskets, and I have no doubt that those made-up ‘money-shots’ of Mumei did a lot for her bishoujo marketability.

Director Araki is guilty of putting hype and sales pitch over making a good anime, but he’s also guilty of boldly trying something new in the production lifecycle, and trying something new for all the right reasons. The make-up animation wasn’t thought-up to make production easier or more efficient, it was dreamed up to take the look and feel of 2D animation to a new level of beauty and prowess and to conjure the tender beauty of an old pro’s illustration work. Sometimes in the anime medium, whether an attempt like this was a technical success or not is far less important than the fact that people cared enough to try.

And who knows, maybe make-up animation may well become another staple weapon in the young Wit Studio and director Araki’s arsenal when they tackle their next big project.