I thought of doing a new regular segment where I talk about an anime staffer who has really made an impression on me in the last month. The first lucky pick is Masaaki Yuasa for his work as the director/storyboarder/screenwriter of Ping Pong. Not all the MVP posts will be this long – it will just depend on the person and how much there is to discuss! 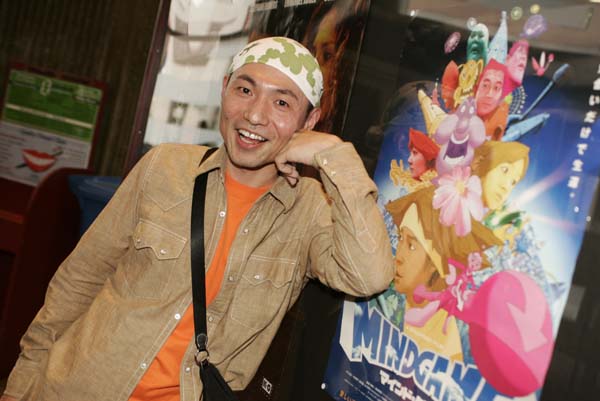 There’s no doubt in my mind that Ping Pong, currently airing on FujiTV’s Noitamina timeslot, is the best anime on TV right now. Having not read the original manga from esteemed author Taiyou Matsumoto upon which it’s based, I can’t speak for exactly how this works as an adaptation, nor to how much of its strengths come from the source material. But what I can say is that the end result is an exhilarating and poignant story realised with a peculiar intensity and gravitas that could only have come from one man: Masaaki Yuasa. This is just the latest step in an accelerated career decorated with achievements and acclaim, as an animator, a designer and as a director. Yuasa is one of the most influential and creatively charged players in the anime industry today, with a history of top-shelf anime under his director’s belt (such as Mind Game, Tatami Galaxy and Kaiba) and a trusted team of artists under his wing.

Make no mistake, no one but Yuasa and his flock could have rendered Ping Pong with the unique visual lustre, punchy sense of style and rough, yet charming production qualities. To celebrate that fact, let’s take a moment to venerate the man and his work. First, how exactly did Yuasa get on board the fast-track express ride to this pinnacle of an anime career? By being a driven, career focused ‘ideas man’ who found himself in a fortunate position early in his working life, basically. Even more simply, by being incredibly talented. But let’s tell the story.

But, as with any great director, Yuasa doesn’t walk alone. Sharing this path to success are a number of close affiliates who are perhaps just as essential to bringing his anime to life with the pizazz we’ve come to expect. Let’s look at a few: 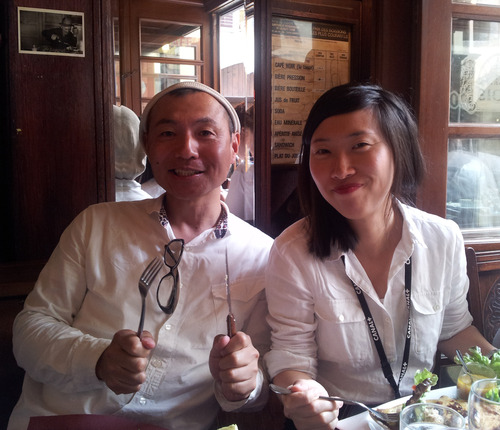 A South Korean female animator who studied animation in England before moving to Japan to enter the industry. EunYoung Choi attracted a lot of attention for her weird but captivating work on the pre-OP scene in Yuasa’s Kemonozume, episode 10 (which you can view here https://www.youtube.com/watch?v=l696kcAunhs). She subsequently worked on future Madhouse projects under Yuasa, with a rapidly increasing involvement – she directed/storyboarded/AD’d several episodes of Kaiba. Now that Yuasa appears to no longer be aligned with Madhouse (and let’s face it, who is?), she seems to have followed him to bigger and better things, being instrumental in the development of Kick Heart, and ultimately credited with assistant director with Ping Pong. Their close and strong working relationship is very clear – she often accompanies him on visits to conventions/events and regularly acts as translator for his western interviews. I’m sure she has played a big part in Yuasa’s worldly approach to making anime. Hiring foreign animators and communicating with overseas fans is probably a big reason why Yuasa’s work is often unique and evolutionary compared with the more insular, traditional industry.

Aymeric joined the Yuasa team with Kick Heart, and I have a suspicion that it was through EunYoung Choi. One reason being that he pulled a huge effort on Choi’s episode #9 of Space Dandy (drawing every single bit background art over 4 and half months), which didn’t actually have Yuasa’s involvement, suggesting a separate working relationship. Beyond that, it’s just a hunch. In any case, he was the art director and background artist for Kick Heart, and then the background artist for Ping Pong (there was no way he could draw all of those backgrounds himself!!). Aymeric worked on an uncommon preproduction facet for both Kick Heart and Ping Pong – colour scripts, which provide direction on the flow of colour throughout the anime. You can view his Kick Heart colour scripts here. Although Choi was credited with Color Coordination for Kick Heart, I feel like Kevin has really introduced a greater understanding of colour and more vibrancy into team-Yuasa’s works.

Michio Mihara is a dedicated animator and episode director with a truly fantastic career behind him, as a valuable mainstay of Satoshi Kon’s works, and with impressive work on other big anime films such as Jin-Roh, Princess Mononoke and Spriggan. He is well known amongst fans because he ran a column on anime-style (a well-known animator focus magazine). It was actually through this column that he wrote about EunYoung Choi and raised her profile. Although his accomplishments in the field of animation were well known, his raw creative excellence wasn’t truly discovered until he was given the chance to do all the key animation for episode 12 of Yuasa’s Kemonozume – a challenge that few animators are able to meet in the arena of modern anime. From then it seemed to be a tradition for Yuasa anime to feature a Mihara episode, as Kaiba and Kemonozume both offered highly praised Mihara episodes (in Kaiba he went even further and drew every single drawing, including in betweens). He was the animation bedrock of Kick Heart, being the character designer and sharing all the key animation between only himself and Choi. There is no doubt that he was a valuable associate of Yuasa, but there’s a theory that a falling out occurred between him and Choi (almost certainly over Kick Heart), which casts his future involvement with them in doubt.

Nobutake Ito is another experienced, premier animator who has worked on films such as Ghost in the Shell:Innocence, Summer Wars, Wolf Children, and most recently a new career pinnacle – storyboard, character design and animation on Production I.G Giovanni’s Island. His technical proficiency is well regarded, enough even to have been trusted by Mitsuo Iso to animation direct a good portion of his Denno Coil. But, in a similar story to Mihara, Ito’s creativity and flair was never seen so rawly and freely as in Yuasa’s works. Yuasa, perhaps after meeting him on the production of Cat Soup bought him on board for Mind Game, for which he animated probably the most thrilling sequence in the film – the final chase scene. From then on, he became a regular and vital presence on Yuasa’s shows, being the character designer, animation director and recurring animator on all of his TV anime outings – Kemonozume, Kaiba, Tatami Galaxy and now Ping Pong. With such a huge involvement, Nobutake Ito is probably the animation champion of the Yuasa team, and it’s doubtful that these shows would have looked nearly as good without the ardor and experience he brings with him.

Taking up a main animator role, Yasunori Miyazawa has been called in as a kind of main animator to all of Yuasa’s efforts since Kemonozume. Ever a rich source of finesse and expertise, Miyazawa is to thank for many of the more memorable and impressive animation sequences of all of his anime. This tradition has continued in Ping Pong, although I feel like a thin schedule has hampered his animation work this time! it appears he has less of a collaborator status than the others and more of the scenario where Yuasa respects his work and wants to keep him onboard for all his projects.

Originally starting out as an animator, his inventive and free work in animation, as well as his original interest in making things move still informs his approach to making anime today. It can be seen in the playful, unpolished animation and drawings you’ll find in all his works. It’s his belief that animation should be something enjoyable to do, allowing animators to express themselves through their work without the burden of stringently adhering to a clean character model and style. This is counter to the direction that the anime industry as a whole is going, and his anime certainly stand out for it, but in a good way. His corrugated lines and elegant roughness make for an unexpected kind of nuance and emotiveness and provides a platform for his staff to put their own ideas and efforts on display at their full potency.

But, while he is one of those directors with an animator origin story, he proved early on that he was brimming with ideas that extended far up into the production hierarchy and sprung quickly into the role of director. I believe he’s most effective in this director’s role – in assembling and harnessing talent, guiding the production of his anime and coming up with new big-picture ideas from the ground up. I’ve talked about how he can bring the best out of some of his notable animators and give them the opportunity to flaunt their individualistic craftsmanship. He’s also good at trying new things, like the fusion of live action footage and 2D animation in Mind Game and Tatami Galaxy, the kick-starter fundraising for Kick Heart, the purposefully under-planned antics of Kemonozume and through to writing and storyboarding every episode of Ping Pong himself.

There’s one big reason reason Yuasa is easily one of the most interesting directors in the industry today. There are many other directors out there who get a lot of attention and garner a fan following from their popular works but ultimately succumb to a rut of over-indulging in the comfort of their own stylistic devices and approaches (Hiroyuki Imaishi and Akiyuki Shinbo are my favourite examples of promising directors who fell into this trap). But Yuasa isn’t content to just sit back and not fix things that aren’t broken, but instead strikes me as the kind of creator who would rather risk breaking them to see what new things he can fashion from the debris. As a result, each of his works promises something fresh and exciting and stands out uniquely as a memorable anime in its own right, not just as another entry rolled out in the Yuasa series. Every project is treated as a challenge and every challenge is a story of growth for this rising director. With a team of imaginative and skilled writers, directors and animators surrounding him and a pioneering attitude, Yuasa is someone who we should all be looking to for great things going forward.

2 replies to This Month’s Most Valued Person – Masaaki Yuasa