A murder scene seemingly foretold by the events depicted in a Boys Love doujinshi; a mysterious, prescient voice that talks through a radio; a key without a lock; an unexplained mass-suicide; a conspiracy to manipulate the human race with global mind control; a young girl who enacts black magic through an invisible man – if any of this is grabbing your attention then this may be the anime for you. A dark, twisted and irreverently convoluted science-fiction mystery, Occultic;Nine is a wild ride that is well worth your precious time. However, I wouldn’t blame you for thinking otherwise if you had only seen the first episode or two.

Occultic;Nine is probably the most polarising and under-appreciated anime of the current season, and it has nothing to blame but itself. Yes, the rumors are true. The series is very hard to watch in its early stages. The characters are either dry or deeply annoying (especially boob girl and talk boy), and the show drowns you in what feels like a barrage of nonsense. In its first two episodes the series hits its audience with layer upon layer of detail and obscurity. Because it’s so fast an frenetic with how it lays the groundwork of its story, it doesn’t feel like it will ever calm down and reach any kind of cogent ‘point’. I’m here to tell you that it does.

Once all the pieces are put into place, the show very quickly starts to unravel itself, and when it does it hits a glorious stride. Plot thread after plot thread are harmonized in a coalescing symphony, building a really gripping momentum. Since about episode 5, I have been hooked, with each episode revealing another exciting turn of events and bringing characters together into a single plotline. It’s hard to go into detail without spoiling anything, but it’s certainly true that a lot of the stuff in the first couple of episodes I thought were pointless drivel are turning out to be really interesting. Every detail in this show has significance.

There’s something really unique about the way this show tells its story. It’s not the often gaudy visual style it leans on, the unusually fast dialogue, or the offbeat sense of humour – it sits deeper than all of that. Occultic;Nine hits a rare sweet-spot of answering burning questions in its patchwork of mysteries at the same time as throwing a kink into the story, a twist that adds a whole new dimension to it all. Being able to unravel a mystery at the same time as building it is the storytelling magic that makes Occultic;Nine so enjoyable. This series is written by the author of Steins;Gate, but the way it unfolds actually reminded me more of a different author’s work – Baccano. I loved Baccano for much the same reason – there’s such an energy in stories that feel like they’re ever expanding while also gaining focus.

Accolades for this go to the light novel author and Steins;Gate creator, Chiyomaru Shikura and company MAGES., namely ‘Morita to Junpei‘ 森田と純平 (real name: Junpei Morita ). This is not, would you believe, the 60+ year old voice actor no prior writing or production credits, as ANN has concluded, but a wholly different person of the same name (born in 1981). Morita to Junpei has, at a high level, done a stellar job unwinding this tightly packed story into a short anime series, although he will certainly regret the info-dump approach of the first episode. I say ‘at a high level‘ because the story is often let down by is script.

It’s a good thing voice actors aren’t paid per word, or this series would never have got off the ground. It makes no apologies for being an absolute talk-fest at times, cramming in an obscene amount of high-speed dialogue. When the show gets in the talking groove for too long you quickly zone out and eventually the words all blur together into this kind of distant, screeching background noise. The scenes in the cafe are particularly guilty of this. In that godforsaken cafe, conversations seem doomed to end up as competing, inane monologues.

Fortunately, when the show isn’t being a talk-a-thon, it’s delivery is absolutely top-notch. Despite it’s overall mystery notes, it has a real penchant for its scary scenes and can quickly make you think you’re watching a top-tier horror anime (if such a thing exists). As a horror buff I really appreciated how these scenes got under my skin. The fear didn’t come from over-the-top violence, jump-scares or ridiculous monsters  but from genuinely unsettling situations and ideas. Everything to do with the ‘kotoribako’ is just awesome. I’ll never look at a box the same way again.

Again, these frightening sequences were delivered with well-honed aural and visual production deisgn. This sequence in episode 6 was my favorite example of this. The creepy squeaking noise of the box, the way the luminescence of the torch sways realistically, the way the kotoribako slightly shifts its form, oozing blood as it does, barely able to contain the atrocities within.

Moreover the suddenness of the whole situation is deeply unnerving – in plain sight in the middle of Tokyo such a horrific thing is transpiring. This episode was the effort of Masashi Ishihama, well known as the director of Shinsekai Yori. An excellent post about his style and talents has already been written over here, so I won’t digress. Other director/creator highlights include: 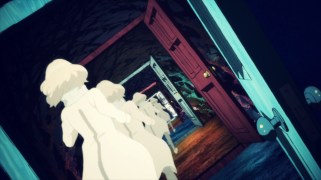 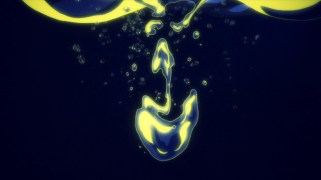 And Mamoru Kanbe (神戸 守), the director of Elfen Lied and So Ra No Wo To, who took the idea of being edgy and experimental a little too far. This is an unfortunate example of when the visual voice of a production shouts over the top of its content instead of supporting it. 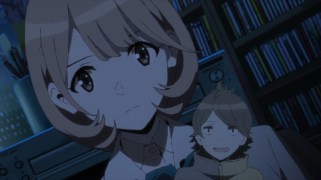 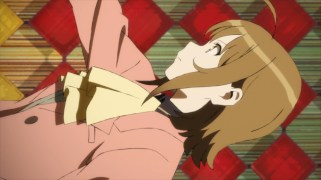 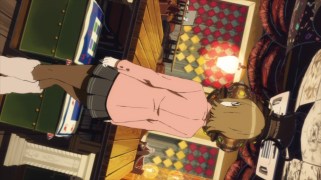 On the whole, Occultic;Nine’s visuals trade nuance for impact, creating a world with rich colours, lavish detail and unpredictable cinematography. The animation from A-1 Pictures is unfailing in quality, though rarely becomes the star of the scene. The storyboard, layout, and finishing touches often come together to make the show deeply engaging and a thing of beauty.

Occultic;Nine seems to be doing a very good job of alienating its potential audience, thrusting itself to the very fringes of the late night TV fandom. That’s why I felt compelled to tell as many people I can that it has a lot to offer if you can look past its first impressions and persevere through some of its more inane moments. If you enjoy a good mystery, or even just an intricate plot, this is well worth forging ahead with.

3 replies to Please Give Occultic;Nine a Second Chance