It was late at night after a long week. Lying on the couch with my partner powering through a few episodes of anime,  my eyes were starting to close on their own as sleep overcame me. It was at this point that I was introduced to the 13th episode of the boisterous TV anime adaptation of Needless. Suddenly I was wide awake, eyes pried open and fixated to the screen. Right off the bat, there was something very different about this episode, something uniquely exhilarating.

I didn’t know this going in, but when I looked up the staff after the episode finished I was astounded to see that the episode was pretty much the handiwork of just two people, and those creators were none other than the devious duo of Seiya Numata and  Kyuuta Sakai!

Before Seiya Numata was swallowed into the eternal pit of no escape that is Milky Holmes, he was a star animator making waves across the industry with attention-grabbing cuts on a myriad of works such as Tora Dora, Gurren Lagann and Higurashi. His ability to pull of dynamic action made him a popular choice for handling fight sequences. His scenes often divided opinions due to his unusual style, but he certainly made a name for himself. His fight from Toradora turned a lot of heads.

Personally I’ve never really been a huge fan of his brand of animation style with its gelatinous warping and stretching, but I admire his magnetism as an animator. He is a devotee of the original charisma animator Yoshinori Kanada, frequently referencing his work and chasing a kindred creative freedom. Alongside Jun Arai, he forms a central pillar to Needless’s aesthetic, which is an uninhibited ode to Kanada and his epoch. Numata exerted a lot of influence with the role of ‘Design Works’ throughout the show as well as ‘Technical Director’.

And it’s difficult to talk about Numata without mentioning Kyuuta Sakai, his sister-in-arms who he brought into most of his projects around this time and has a strong personal friendship with. Sakai is probably a name fresh in most people’s minds as she is the accomplished character designer for the brand new hit Re:Zero. She is now pretty much exclusively a character designer/chief animation director and thrives as an illustrator.

Probably a key uniting factor between the two is their shared fondness for drawing sexy young girls, and the term ‘lolimator’ was coined for them during their days together. If you don’t believe me, the first Needless ED, also featured in this episode is their work and one of the most carnal, intoxicating hits of fanservice I have ever been fortunate enough to witness. 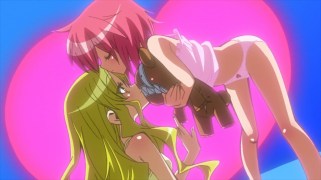 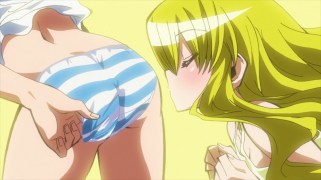 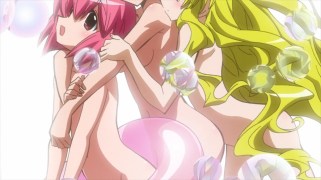 Before Sakai went to White Fox with her work on Steins;Gate, these two were inseparable, and this episode of Needless is one of the best things to come from their early union. The episode is directed and storyboarded by Numata, and, excluding oversight from the chief animation director, entirely and exclusively key-animated by the two of them. It’s a concentrated hit of the Numata and Sakai pair!

As a result, the episode stands out clearly from all the others. Numata’s storyboard and direction immediately make an impact, forgoing convention to deliver an episode that is uniquely tense and weirdly intimate. Numata takes the idea of a stage-play approach and runs with it, focusing on the dialogue and expressions of the characters to the exclusion of all else. There’s no attempt to hide this approach – the episode opens with the room darkened like a stage and all the characters placed under a literal spotlight. Many cuts are plane with an audience line of site, and dramatic lighting is abused like nothing else. 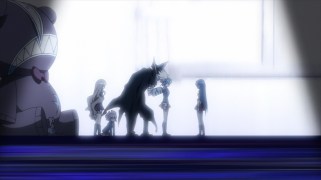 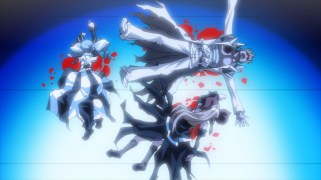 The style actually reminds me of early Akiyuki Shinbou with it’s Ikuhara-esque shots and focus on striking colour design. Numata applied bold neon colouring to many of his sense to deliver the sense of exaggerated drama and also a cool-factor. Some of the shots definitely delivered. 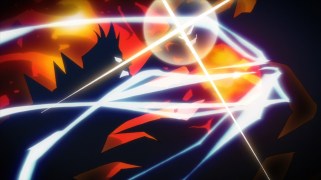 In addition to the darkness enshrouding the scene and the striking lighting, Numata applies a focus on intense facial expressions in close-up which includes detail such as sweat forming and rolling down people’s faces. This all makes for a potent sense of tension and claustrophobia despite the vast open room the events occur within. The moment in which the main villain makes his entrance in particular casts a palpable sense of dread making for one of the most suspenseful moments Needless ever had. 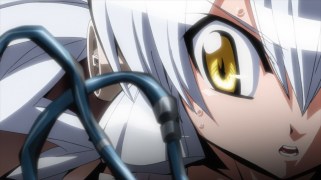 The animation itself is surprisingly active given the fact that it was only key animated by the two of them. Numata works his usual magic with the action highlight that features frenetic movement, spinning camerawork and distorted drawings to ram-home a sense of force. The portion of the fight that is completely upside down is one of those quirky moments that really defines Needless.

One of his most memorable cuts from the episode is not from an action scene but rather this pretty inexplicable cut of Setsuna’s nose bursting into a nosebleed with the intense rage overcoming her. This is an example of Numata’s contorted style works really well as her face twists into this sharp glare of focused fury. I challenge you to find my an anime character looking more angry than this.

The cuts that were presumably handled by Sakai meanwhile were simple fluid animation. The smooth moments stood out to help build up the sense of excitement and differentiate the episode from the normal limited kanada-school style of the rest of the series. There’s also this indescribable sense of style to her movements. Stepping up to being a prolific animation director indicates that she was a powerhouse animator back in her day on the front lines. She apparently has a special skill where she holds both pencil and colour pencil in the one hand and can swiftly use the colour pencil to add shadow lines.

My rewatch of Needless has been an enjoyable affair on the whole, but this episode turned it up a notch, from mildly bemusing to genuinely exciting. Seiya Numata’s unconventional design sense and bold stage-play approach combined with the animation goods delivered by partner-in-crime Sakai make this a grandstand episode.

This episode is not only one of the most condensed examples of Numata and Sakai working together, especially when you include the ED that was exclusively handled by them, but it also appears to be the climax of Numata’s extensive involvement in the series with no major credits on any episode thereafter. He is technical director and a design contributor on the show throughout, but no front-line involvement as an animator. Beyond just Needless this is the most interesting work I have seen of Numata’s in terms of storytelling and direction.