It’s been a long while since I watched Full metal Alchemist: Brotherhood. Names of characters, the beats  of the story and most of the dramatic climaxes have faded to a distant haze. But one brief moment of the 60-odd episode saga still leaps to mind with perfect clarity and that is the death of Lust by Roy Mustang’s barrage of fire attacks.

It was about a third of the way through the series, and by this point these sinful villains had put the heroes through all manners of torment and, with the regenerative power of the philosopher’s stone seemed to be utterly indestructible. This moment marked a turning point with the sheer power of Roy’s sustained attacks overcoming their supposed immortality and finally defeating one of them for good. It was important to the story, but that’s not what made it so memorable.

It was one of those moments where the power of animation took a good scene and made it an unforgettable one. And the impact of this one short scene on viewers and even the industry as a whole can’t be understated – after all, it was a rare instance where it wasn’t just die hard sakugabros who got weak at the knees. Fans of all kinds were united in awe by Yoshimichi Kameda’s unique, visceral and powerful animation and it was the true launchpad for his career that now has him as one of the most well-known charisma animators of our time. I dare say the sakuga community gained a few members that day – it certainly left an impression on me too.

But what’s so good about it? Kameda took a character’s death scene and cut through all the usual shounen anime niceties of neatly drawn, attractive characters to focus on sheer, untamed intensity of being burnt alive using whatever methods he could. He threw out the book and used rough, contorted but extremely detailed drawings, and depicted withering figures in the flames with pure shadow, barely recognisable as human. It’s probably fair to say that TV animation hadn’t seen something quite like this before.

The first couple of cuts waste no time in making a statement with the realistic disfigurement underscoring the real violence of the sequence – while fire in anime is too often treated as some kind of orange magical essence that reduces a characters HP until they’re arbitrarily defeated, here it burns away the skin to muscle and bone and singes the hair. Already his drawings show carefully defined gritty details well beyond the level of the rest of the anime up until this point.

But this is only the beginning; Lust is again and again engulfed in a furnace of flames, burning away her form until she becomes this writhing, flickering contortion. Here Kameda is no longer using lines and shading for Lust, depicting her purely with ink and brush. While it’s relatively common for this kind of cut to do away with standard linework for other techniques, Kameda’s execution with the brush is unique and exceptional. His drawings strike just the right balance between form and distortion so that this scorched horror is still strikingly human. Combined this with the jittery, flailing motion he creates with his frames and the overall effect is as unsettling as it is exciting. 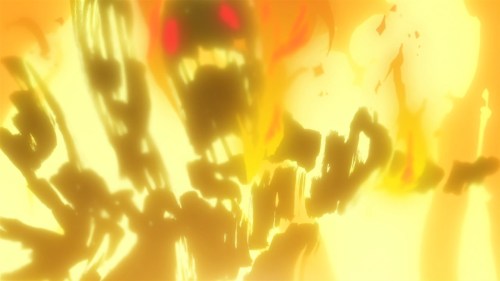 His animation throughout this sequence has such unrestrained intensity to it that impact frames might seem redundant, but he still breaks them out as yet another tool in his arsenal to take the power of Roy’s inferno to the next level. And they are a sight to behold, a primal clash of light and dark. 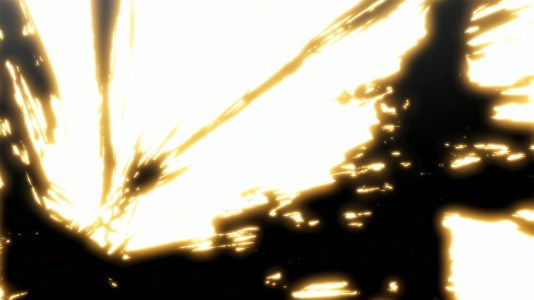 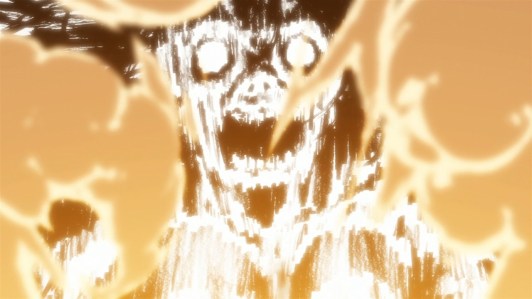 Lust’s final screaming lunge – a last furious, escape from the jaws of a fiery death is the real money shot here that sells the whole scene, using Kameda’s creative gusto not just for wow factor but for vivid emotion.

Here, Kameda’s raw, messy drawings are imbued with the very essence of desperate rage. Again the conventions of character design and crisp linework are left behind in the dust, but now more intimately, as every scrawl and stroke becomes a perfect etching of agony, hatred and desolation.

Looking into Lust’s eyes in the caps below you can really feel the anger emanating from her. I don’t know about you, but it reaches right into my heart. I don’t think drawings like this can be taught, it’s Kameda’s pure artistic vision incarnate and a profound demonstration of his talent.

The use of the flickering trail of the reflection in Lust’s eyes is a clever way to add speed and force to her charge. 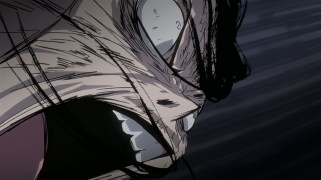 It’s also a fine example of his use of the calligraphy brush (sumi-e brush) to add a visceral, textural aesthetic to the genga. You can see this used for her hair in the screenshots above and also in the genga below (from a different episode altogether) 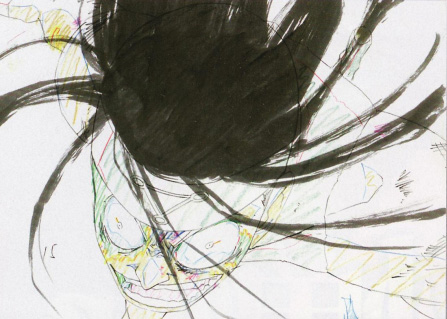 While he’s very capable of nuance and telling through motion, the sheer impact of his drawings carry the lion’s share of Kameda’s power. Each of his key frames is a piece of art in its own right, especially in this sequence, which remains one of his best to this day.

It almost goes without saying, but he was credited for in-betweens this episode so it’s fair to assume his sequence was completely animated by him. I think the concept of in-betweens doesn’t even really apply to Kameda’s efforts anyway – that would imply there’s some comprehensible logic separating his frames.

The thing about Kameda’s animation on FMA is that it did away with the staples of action anime, the crisp linework, stringent on-model animation and elegant choreography. That stuff is all fun of course, but it feels like a mere farce when Kameda  enters the stage. All the designing, planning and teams of directors in the world don’t hold a candle to the innate talent of this one man let loose. His animation is rough, wild and unconventional but it’s not trying to be. The vibe I get from his work is that he’s not throwing in techniques just because they’re different or to imitate his sakuga forbears; he just earnestly throws everything he has at a scene to make it as good as it can be. And it works.

In his animation is a kind of truth that is almost impossible to grasp, and that is why he’s the real deal, a truly dynamic charisma animator in the spirit of Yoshinori Kanada.