me (said to a mate over dinner): “I feel like watching some shitty anime tomorrow!”

I watched all three episodes of Robot Girls Z

There you have it. I’m not sure if anyone else gets in these same moods as me, but every so often I just get this nagging sensation start to brew in the cockles of my heart – a yearning to watch a mindless, plotless and unapologetically trashy anime. It’s illogical and irrational, but it must be done. This time, Robot Girls Z, a 3-part OVA series by Toei, just happened to catch my eye and looked like it would fit the bill to satiate my needs.

The basic gimmick behind Robot Girls Z is that it features personified mecha from Toei’s classic old-school franchise, Mazinger Z. Actually, rather than ‘basic’ premise, maybe I should say the ‘whole premise’, because that’s about all there is to it. The robots-turned-girls are a team of superheroes who are locked in an amicable struggle with an evil organisation who aim for world conquest, which is also wholly staffed by cute girlised-robots. When it’s all said and done, the story is all a thinly veiled pretense for gags, fanservice, and cute, silly fun. Oh, and tickles of nostalgia for the veteran fans of the old super robot series.

The allusions to and in-jokes from Mazinger Z are probably the only drawcard this series has for a lot of people – the one thing that makes it not just another pile of moe nonsense. But for me it was maybe the only deterrent for the show. Because I am a giant, unenlightened pleb when it comes to the realm of mecha, or super robot .. or whatever this is (see what I mean). I see the genre as some Macross Wing Gattai Destiny Z haze, and can barely tell a Gundam from one of those other ones that isn’t Gundam. Okay, maybe I’m exaggerating, but I will say that, although it’s not something that keeps me up at night, I do feel like I’m missing out at times like these. Like the time I had to watch Carnival Phantasm with a well-nasu-versed Type Moon friend so he could explain the jokes to me and tell me when to laugh.

Ditto here; I couldn’t count the amount of times I felt a joke or homage skim over my head. Even without my prior knowledge, I actually started to get curious about how the grabbing, adorable designs came to be. This provides a nice comparison. 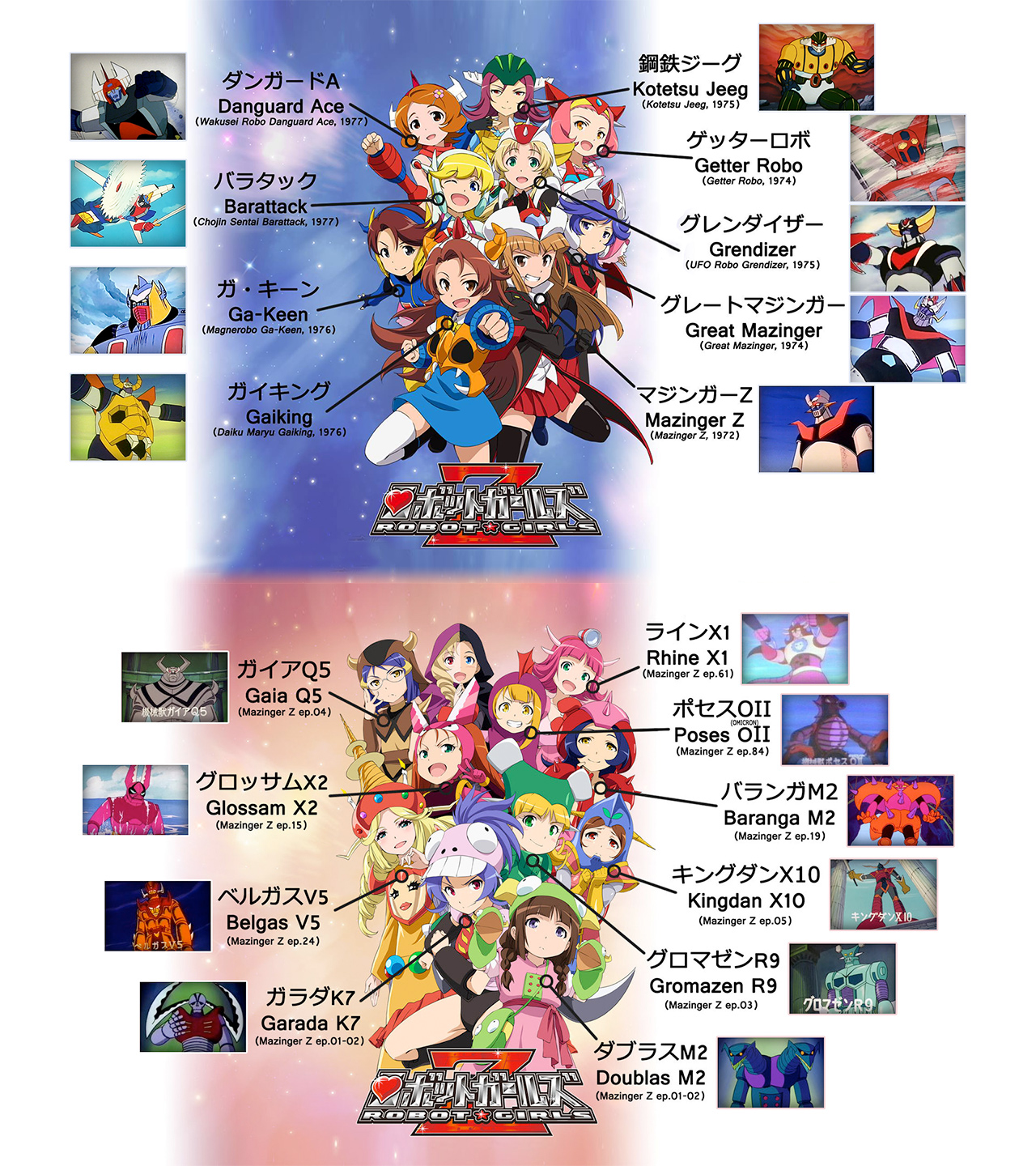 So most of the design work is pretty simple, it turns out – a touch of costume colour scheme, whack on a helmet styled after the robot’s face and hey presto you have a robot girl. I do like what they did with Doublas M2 though – converting the twin heads to cute hand puppets is a nice little idea. Actually, Doublas M2 is the character designer’s favourite robot/mecha so it makes sense that she got the extra dash of ingenuity. On the other hand, Poses oII’s unflattering, finned wetsuit is a fitting conversion of the original ugly sea beast. But I think it would be really interesting to see how the personalities of the girls, and their interactions were translated from the original series. I’m sure there’s a lot more nuance to the parody behind that.

I do think a Mazinger fan would get a lot more laughs, smirks and knowing nods of appreciation from this than I did, but I ended up enjoying it for other, more carnal reasons.

You see, Robot Girls Z embraces the otaku nature of its target audience, and doesn’t think twice about piling on the fanservice, cliche, references and moe ingredients. I enjoy a good story or sakuga artwank as much as the next man, but I’m also willing to put aside my pretentiousness sometimes and just get swept up in the rush of pretty colours, cheap laughs, cute girls and panty-shots that anime is often known for. It’s as though Robo Girls Z knew I had my mecha Learner plates up, because it offset my Mazinger ignorance by turning up the dial on all those things.

I really didn’t expect this show to take the fanservice as far as it did, but I can’t say I’m disappointed. Yes, I’m one of those despicable fans who doesn’t see a problem with creators flaunting the good looks of their heroines (or heroes if you’re that way inclined). This show had everything from underwater breast molesting, loli panties, right through to a lesbian trap near-sex scene. The whole show had a pleasant air of eroticism to it that meant it was hard to see a dull moment behind the barrage of eye candy. I guess it makes sense, since the original robots never wore clothes either, right? The fanservice was obvious, but always cute and vibrant, and never went far enough to feel dirty or pornographic. Much like Yozakura Quartet: Hana no Uta recently, it’s fanservice done right – just the right degree of prurience. 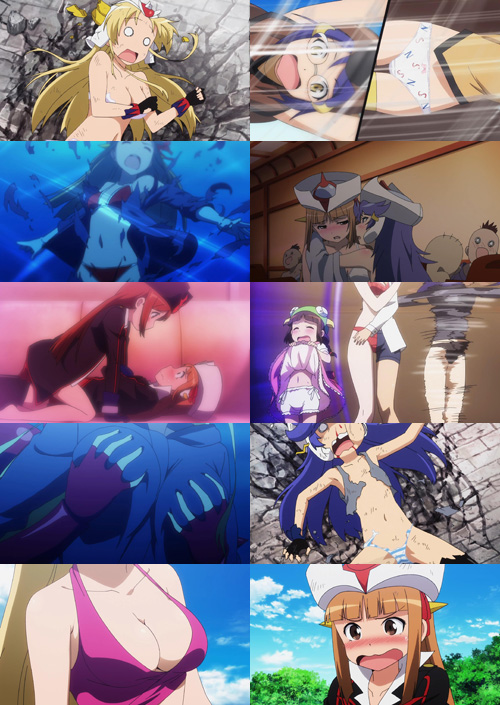 And it really helps that the girls themselves have really adorable character designs! I found myself forgetting they were based on an old super robot show, and just appreciating their charming designs at face value. I really love this style of facial design – their colourful, rounded eyes and childish expressions just sing moe!

Initially, it really reminded me of Kanzaki Hiro’s design work (Ore no Imouto, Go! Go! 575), which  I then discovered made a whole lot of sense, because the designer here, Tetsuya Kawakami, was the chief animation director for much of OreImo. That means he was the main person in charge of transferring Kanzaki Hiiro’s designs to anime form. I do think Hiro’s designs rubbed off on him a bit here.

But he is also a very successful character designer and animator in his own right. He seemed to fall into the animation business from his childhood affinity with drawing, and got his foot in the door working at Studio Mu. He built up a strong biography of key animation work for studio BONES and J.C Staff on Full Metal Alchemist, Wolfs Rain, Eureka 7, Kurau Phantom Memory, A Certain Scientific Index, and others. I’m not familiar with his animation specifically, but apparently he was called upon to add fluidity to action scenes quite a lot. But he’s known more for his prolific illustration and character design work, which started out with Shigofumi and has reach its popular pinnacle so far with Sword Art Online’s characters.

Robot Girls Z is a great display of his skill – he designed a lot of characters for this, and every single one of them stands out in their own. Here’s a few samples of the designs, taken from the official website: 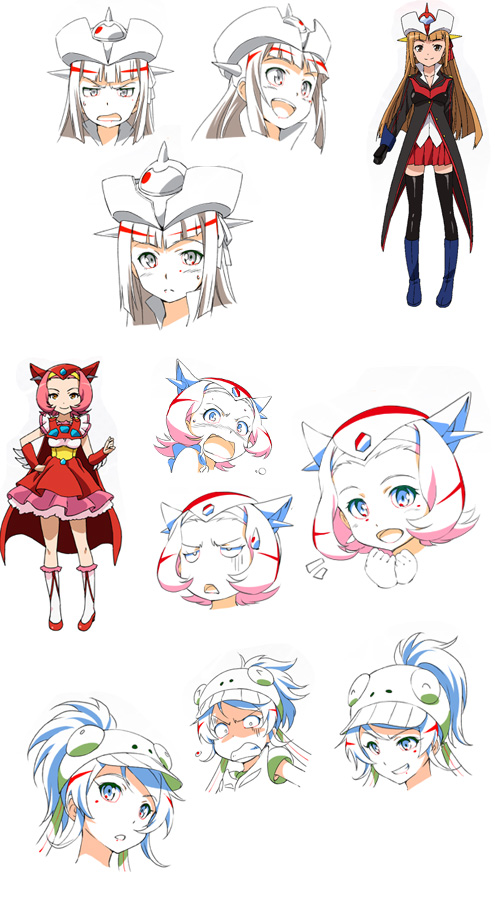 Their facial definition, and the gamut of expressions they exhibit gives them a natural, almost effortless striking personality. And, aren’t they just so cute!? He’s certainly very in tune with the popular style, and has a real knack for drawing beautiful girls who strike the moe chord but can also look fierce if they need to. Kawakami must have moe flowing through his veins. It wouldn’t surprise me because drawing cute girls and alluring heroines has quickly becoming his speciality (a forte  he acknowledges himself). Not just for his design work, his animation is usually employed for bishoujo scenes. His more recent lineup of work illustrates this quite well.

But he also has a predilection for the slapstick and comical. That might not be apparent from his body of design work, but when you consider that he was the chief animation director for this series, it’s not a stretch to consider that a lot of the comedically exaggerated facial expressions had his input. Whether it was his doing or not, they were much appreciated and really gave this anime a lively boost. He actually got down and dirty and did some genga for episode 3, and I’m actually pretty curious about which cut(s) were his, now that I’ve read about him! 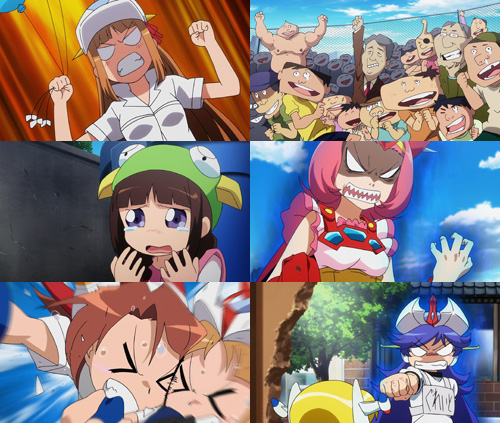 The animation overall was a great boon to the OVA, with the right amount of exaggerated poses and demented motion to help pull off the jokes. The look of the anime is vivid and rich in colour, but not colourful to the point of being obnoxious.

The action scenes were enacted with fast, spurious and spirited limited animation, and dabbed with stylistic throwbacks to the animation of the old original shows, the heyday of Yoshinori Kanada and others of his ilk. 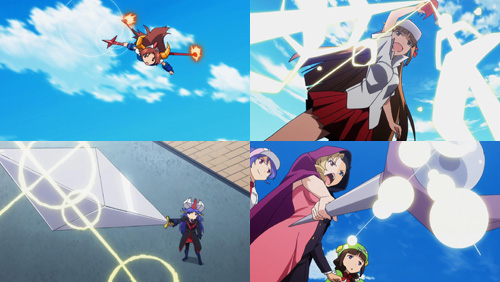 I also noticed these little references. Blink and you’d miss ‘em but the little man in Z’s mouth is actually a caricature of Go-Nagai himself (who created Mazinger Z).

The key animator lineup stayed pretty consistent throughout, and this resulted in an anime with a cursive visual coherency, with every episode delivering the same polish and punch as the last. On the downside, that meant there were few idiosyncratic moments to give it that ‘sauga’ edge – one of the few being this brutal punch in the third episode. The rough, bold lines and jagged movement indicate that it was Kan Ogawa. You can see the similarity for yourself in this MAD. I’d called them a sketchy charisma animator – some things in life can only be expressed by rough pencil lines!

I’ve always said that good designs, and strong animation can turn a anime that sounds bad on paper into something genuinely enjoyable, and Robot Girls Z one of many examples of this. Its appeal is essentially otaku nostalgia and smut, but it’s fashioned with such gleam and energy that it’s hard to resist. Robot Girls Z is cute, fun and easy to swallow, so if you find yourself in one of those moods to watch something less high brow, I’d recommend it.