Disclaimer: This post does not contain any trace of spoilers; any resemblance to actual spoilers is purely coincidental and unintended. This post may cause all-knowing manga readers to violently shake their head and laugh, so please take pity on us anime plebs! Also, this is brought to you by discussions I’ve had with a friend.

I can now safely say that when I first started watching Shingeki no Kyoujin I had completely the wrong idea about the show. With gleeful ignorance I took the show at face value as a shounen anime about the struggle of little people to avoid being eaten by big lumbering, hungry people. It seemed like a simple but effective story. But it’s time to throw that view out the window, because it’s now clear that the show is anything but simple. In fact, it’s turning more and more into the animated version of Lost with every episode. If you pay close enough attention there enough questions hanging in the air that it can make anyone’s head spin. It’s no longer just an action series, but a sophisticated tapestry of hidden human motives and mysteries woven over a backdrop of a fractured society. Here’s a taste of some of the questions on our plate at the moment:

Having so many questions like this lingering around makes me really excited in the potential of this story to go on for a long while and get to some really interesting places. I really have to hand it to the author of this manga: he really has a handle on his storytelling. And what I like about it particular is that it has unfolded so organically into the complex beast it is today. Whenever we meet new characters, the breadth and depth of the story takes another step. He clearly has the story mapped out pretty well in his head.

No Shit it Was Annie!

So let’s get to business. We have questions, and now it’s our job as fans to come up with answers, right? I just finished watching episode episode 23 and that finally cleared the air on the identity of our lethal female Titan. We should be happy that we got some answers, but I think every man, woman and child had reached the conclusion that it was Annie already – it certainly didn’t come as a shock when she came out of the closet (although I loved Armin’s plan to out her). I mean, Annie was conveniently with the Military Police, shared the female Titan’s agility and combat prowess, and even looked just like her.

But Who is The Armored Titan?

But the burning issue for me now is putting a name to the armored titan and the behemoth (and doing it without the aid of spoilers). 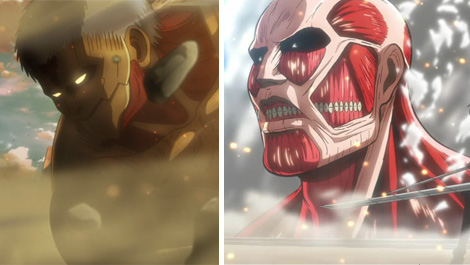 Luckily, I think there have been several hints dropped about this. Let’s rewind back to when Annie first showed up in her titan shoes. This was episode 17. She showed up and killed some people near Armin before knocking him down. 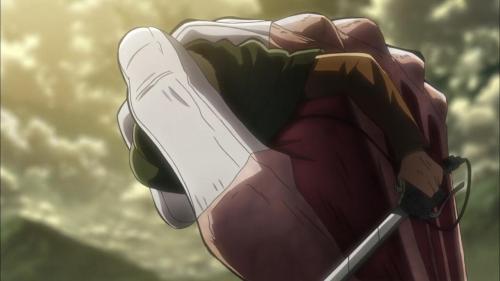 Importantly, she spared Armin’s life – a key decision that would come back to bite her later. While we thought at the time this was done simply because she was only interested in Eren and he wasn’t perceived as a threat, I think it was likely an unusual moment of compassion from Annie.

The interesting stuff comes after this. All of a sudden Reiner shows up and joins Armin in following the titan. His reaction to Armin telling him that she is not an abnormal type but a human Titan is surprisingly intense – he looks concerned rather than surprised. Armin worked out too much, too quickly. 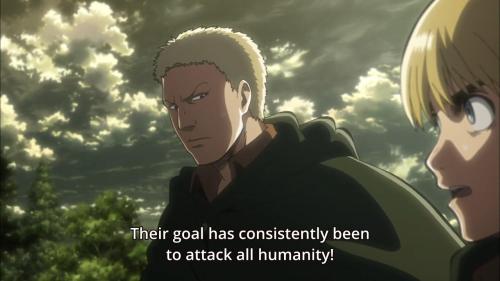 Now Jean shows up. When Armin mentions that the female Titan is searching for Eren, they all realise that they had been told Eren was in a different part of the formation – they all had deliberate misinformation. Armin then thinks out loud about where he would be and Reiner presses him on wear he would be. 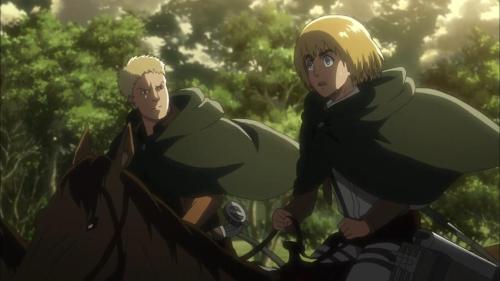 Armin tells him that Eren would likely be in the center-rear. This is when Jean decides they should slow down and attack the female titan. His motives for this, which include a flashback, seem genuine. Meanwhile,  Reiner still looks concerned. The three of them attack. Interestingly, the female titan slows down for them.

And I don’t think it’s tired! They take the chance and attack. Armin and Jean and knocked down. This is when Armin lies to the female Titan and tells her that Eren is dead. She seems to stop, maybe believing him. Now Reiner suddenly launches a one-man attack straight for the neck, a suspiciously suicidal undertaking. He is grabbed by her and she covers his face. Note that at this stage, with her strength, she could easily have killed him.

But then the impossible happens – he explodes from her palm unharmed. An heroic escape by all appearances. But then she gets back on her feet. And she now seemed to have a new sense of purpose in her stride. Reiner says ‘she must be running away’ – which sounds like bullshit. Meanwhile Armin notices, to himself this time, that she is heading right for the center-rear. 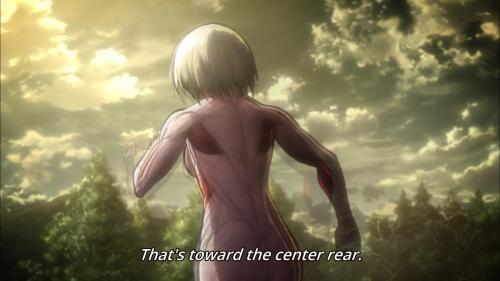 So it’s pretty clear what happened. Annie slowed down when she noticed Reiner was chasing her down, perhaps to see if she had something to signal to her. Reiner jumped in at the appropriate time to be caught by her and then tell her where Eren is located before being allowed to escape. In my view, Reiner is definitely the armored Titan. 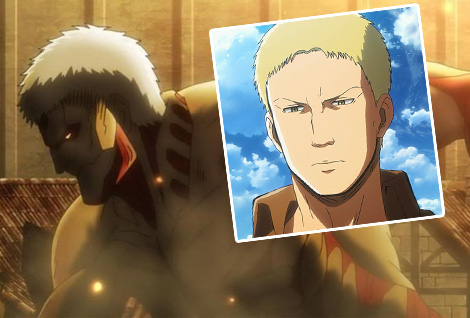 As For the Behemoth..

Now, who is the Behemoth? My only guess at this is based on a conversation back in episode 3, which further cements Reiner’s identity. Armin asks Reiner and Bertholdt where they are both from. Reiner and Bertholdt both seem close and they say they came from the same mountain village which was conveniently totally wiped out. That’s all I have, but maybe it’s Bertholdt..

It’s clear that there’s a lot of foreshadowing and hints in early episodes of Shingeki, and I definitely recommend giving them a rewatch with later events in mind. I’m confident I’ve worked out some of this stuff, now I’ve gotta start looking at some of the other questions. A fans work is never done..

Please share your own thoughts and theories but NO SPOILERS PLEASE.